Thankfully a few of you tipped me off to a product you’ve used with success called Polyblend Grout Renew. Let me just skip to the punchline: it worked, and I wish I had tried it before spending six months scrubbing my mind out. 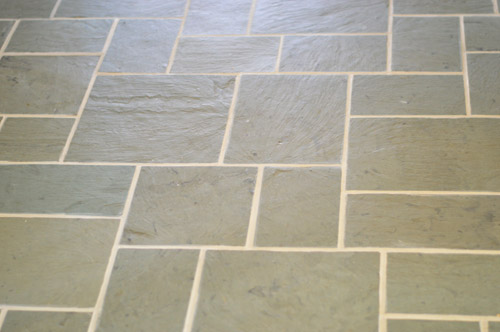 The cost? A cool $12 from Home Depot. Can I get a what what? Note: this might sound like an ad for the stuff, but Grout Renew doesn’t know us from Adam – I’m just beyond grateful that it worked. 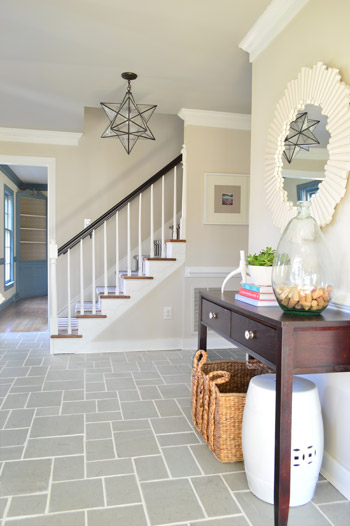 It did take nearly eight hours to apply, but since I had easily spent 25 hours trying various stain lifting methods before resorting to this, well, eight hours with a bottle of Grout Renew was a small price to pay for VICTORY.

That’s right, there were mic drops. There was shoulder dusting. There was a full on pregnant-lady end zone dance.

There were several colors to pick from, but John and I decided on Oyster Gray after admiring similarly toned grout at a neighbor’s house during a Christmas party (they had the same foyer tile that we do, but it spanned all the way into their kitchen with sparkling light gray grout that brought tears to my eyes). We actually brought home a darker option too, but it was so close to the stone color – and some of the dark stains in the grout – that we worried it would be a lot of work for grout that still looked kind of muddled and dingy. 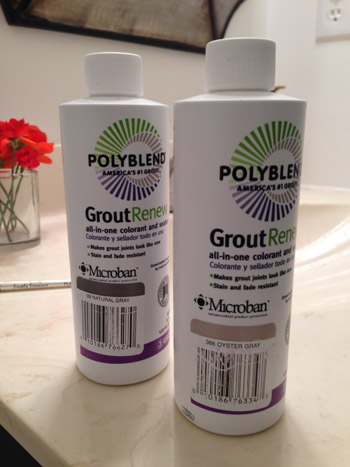 Oh and the Grout Renew was low odor and low-VOC, so this pregnant lady could get down with it. I did wear a respirator, along with opening windows, just because I’m into added ventilation and bad Bane impersonations.

Anyway, the first step was to clean the floors thoroughly. I’ll pause while you laugh since I had already done that TEN MILLION TIMES. Next it just said to use a toothbrush to apply it into the grout lines and then let it dry for 24 hours. I went with a thin craft brush because I had way more control (read: way less mess on the tile surface) and started in the half-bathroom because I figured I could work my way out of the room and close the door behind me so it could dry. 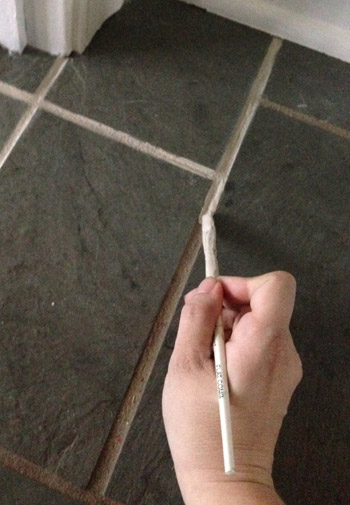 Even with a small craft brush there were still times when it got on the surface of the tile, and there was a very short window for wiping it off before it set (and then had to be scrubbed with a fingernail, which was a huge pain) so I literally would do one or two cracks at a time and then quickly follow up to smooth both sides of the seam out with a small piece of toilet paper (this would remove any from the surface of the tile as well as make the sides of each seam nice and straight looking). 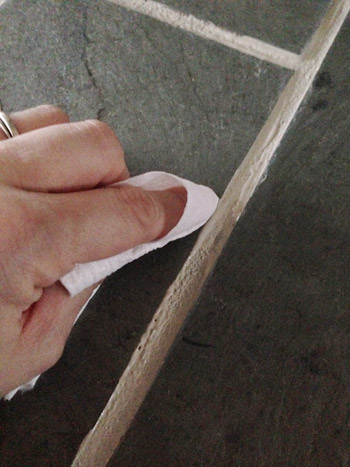 It was the opposite of fast. But it worked. Slowly I eked my way out from around the toilet and right out the door, which took about an hour and forty five minutes. That was day 1. 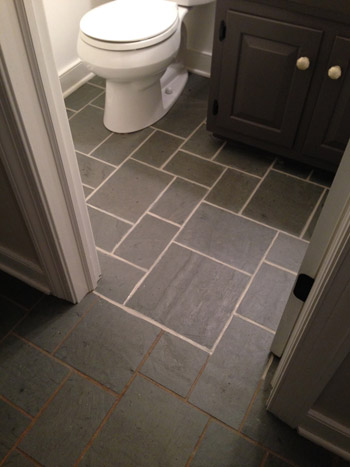 Day 2 involved three more hours of line painting and wiping, and I opted to do 50% of the foyer in a strategic way so we could all still walk on the other half of it. In other words, I did half of the hall, half of the area in front of the steps, one of the two closets, and half of the area leading into the office, so we could all still walk on “the dirty grout” sides to get around. Here’s a shot to show you how hilarious John is. I said: ok, get creative with this picture so my giant respirator doesn’t look weird. I like his version of getting creative – just lop off the whole head area. 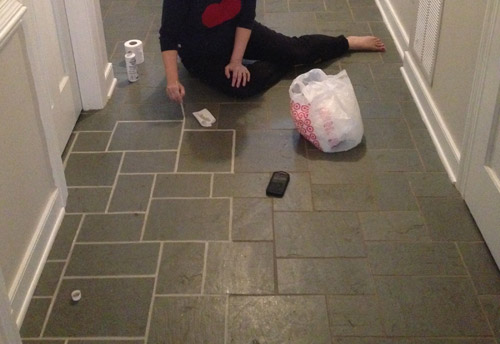 The second day was the hardest day by far, just because I was still kind of sore from contorting my pregnant body around in the small half bathroom the day before, and the little knobby parts of each of my ankles were dragging on the tile as I scooted around like a dog with fleas, but it was all worth it. Worth it and then some! 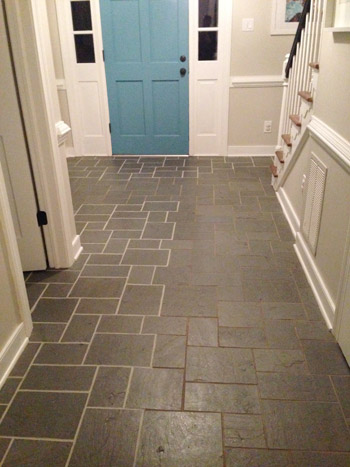 Day 3 was another three hour process, but it was the most exciting day because I could see the light at the end of the tunnel. The end of the longest-running house battle that I had ever waged was near. I just worked my way around the foyer doing the other half of those pathways that I had done the day before, and I ducked into that last closet while pausing occasionally to fist pump and work on my clean grout acceptance speech (“I’d like to thank the academy, and the grout gods who invented this cheap bottle of miracles and unicorns”).

Then we just gave that last application the same 24 hour drying period and made sure nothing got wet for 72 hours (since that was another warning on the bottle) and it seems to be stuck like glue. It’s a good deal lighter than the old grout was, which still makes us say “whoa now” when we walk through the hallway, but we think it’s just our eyes adjusting, since we loved the lighter grout in our neighbor’s hall and kitchen. Maybe after 6 months our brains just can’t get over the fact that it finally looks clean! 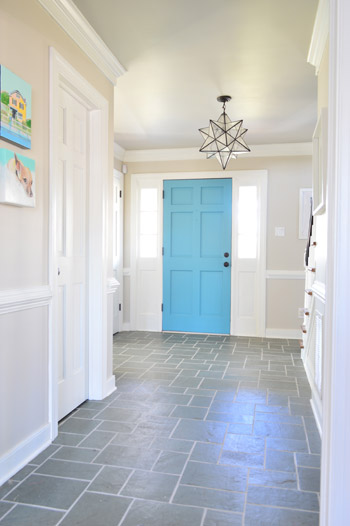 It has really good five star ratings everywhere we read about it (on Home Depot’s site, on amazon, etc) so I’m crossing my fingers that we’ll have the same long-lasting luck with it (I still have about 1/4th of the bottle leftover for touch ups in case we need them down the line). I’ll definitely update you guys if anything funky happens, but so far it has been great.

Update: After nearly two years of use, even with semi-frequent moppings, muddy shoes/paws, and a whole lot of foot traffic, our grout still looks identical to when I applied this stuff (you can see an updated picture that we shared after six months of use here). For the folks who can’t find it in stores, here’s an affiliate link to it on Home Depot.com, and since a few people have also asked for a “way back” before shot, here you go. It’s crazy how much bluer the tile looked with the brown stained grout and all that blue trim! 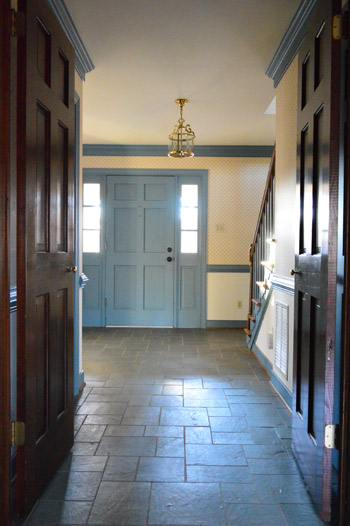 Is anyone else waging war on something stubborn that’s taking more than a few attempts? Like some grout that refuses to get clean? Please feel free to pin and share this post to spread the word (I’d LOVE to help anyone else dealing with this supremely annoying issue so we can all do the clean grout end zone dance together).